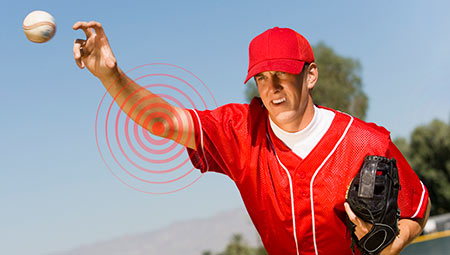 The bases are loaded. You've thrown two strikes and you're on the pitcher's mound. You wind up, and… the inside of your elbow is killing you. Pitcher's elbow is a common condition, especially in young baseball players whose bones aren't fully developed. It's an “overuse” injury caused by repeatedly pitching overhand, whether at practice or during games, without giving your throwing arm enough time to rest and recover.

This condition, like tennis elbow, is a form of elbow tendonitis. The biggest difference between the two is that pitcher's elbow affects the tendons on the inside of the elbow while tennis elbow affects the tendons on the outside of the elbow. Pitcher's elbow usually develops gradually, causing tenderness, pain and swelling on the inside of the elbow. It reduces your range of motion and could prevent you from playing. In addition, the elbow can become “locked.” Fortunately, chiropractic care can help alleviate the stresses contributing to the pain so your arm can heal naturally, without medication or surgery.

What's Going On in Pitcher's Elbow

The elbow is an impressive structure. It's both a hinge and a pivot joint: the hinge bends and straightens your arm while the pivot lets it rotate. The elbow trades off its versatility for vulnerability to injury. Here's an overview of the structures that make up your elbow:

All these bones are moved and supported by muscles, ligaments and tendons, any of which can become irritated and inflamed. A common problem is flexor tendonitis—inflammation in the tendons where they attach to the humerus on the inner part of your elbow. It makes throwing painful and, if the inflammation is severe, it will hurt even when you're resting.

Playing through an injury is not recommended and can make things far worse.

In some extreme situations when there is tearing of the ligament, “Tommy John surgery” (named after a baseball player in the 1970's) may be required. In this procedure, another ligament in the body is used to replace the injured elbow ligament.

There is another option, though, if you have pitcher's elbow: chiropractic care.

Chiropractors use noninvasive, safe techniques to treat pitcher's elbow rather than prescribing pain medication or recommending surgery. These include:

A series of chiropractic treatments is often needed to treat pitcher's elbow. During this period, it's important to rest your arm and not try to pitch until you're cleared to do so. You should return to practice and play gradually. You can also ice your elbow at home, 20 minutes on and one hour off, or as advised. Your chiropractor can also recommend exercises you can do at home to regain strength and flexibility.

To prevent further injury to your elbow, follow these tips:

After recovery from pitcher's elbow, consult with an expert who can show you the mechanics of correct throwing, which will reduce the chance of another injury. Prevention is always best, but if you do start to feel pain in the inner part of your elbow, consider calling a chiropractor. The sooner you start treatment, the sooner you can get back on the field.

Find Out When We Are Open

Send Us An Email Today!